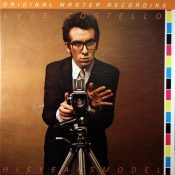 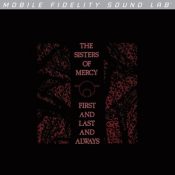 The Sisters of Mercy – First and last and Always (MoFi) 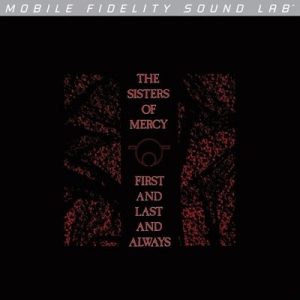 “First and last and always” is the first album of the British band The Sisters of Mercy. It came out on the 11th of March 1985. For many people, and I am one of them, this was also their last album. Indeed, before this LP, only 6 singles and 4 EP’s (maxi 45 RPM) were released. After this album, Craig Adams (bass) and Wayne Hussey (guitar) left the band to establish a few months later “The Mission”. Gary Marx (guitars) established “Ghost Dance”.

The albums that came after that reflected the melomania of the singer Andrew Eldritch rather than the soul of Sisters of Mercy. The First and last and always vinyl record is positioned 14th in the British charts. It is still considered today as one of the gothic top 10 albums. The sound of this LP shows characteristics of this movement: clear guitars, bass, and melody that go with the deep, hollow voice of Andrew Eldritch. This vinyl record is legendary for all amateurs of this genre and must absolutely be present in all respectable record collections.

This MoFi vinyl record is perfect! I myself own the original that I proudly bought in 1985 at Rennes Musique, and I can affirm that MOFI is almost superior to Merciful Release in terms of transparency and dynamics. 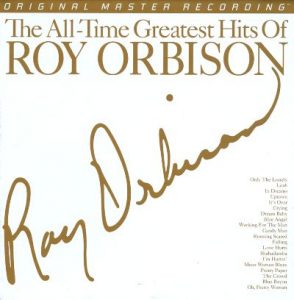 Roy Orbison is sadly less famous in France compared to Elvis Presley, Chuck Berry, or Jerry Lee Lewis. However, this song writer is certainly one of the most famous of the 20th century! Roy was born in Texas in 1936 and signed for Sun Records in 1954. In 1960, he joined the label Monument where he recorded and published his biggest successes. In 5 years, 22 of his singles reached the Billboard top 40.

This MoFi re-edition perfectly respects the original master. The quality of this vinyl record is remarkable. This record puts forward Roy Orbison’s singing and guitar talents. It is important to take into account that this voice is one of the most beautiful voices in the history of rock. When hearing the song “Crying” for the first time, Barry Gibb of the Bee Gees said “this is the voice of God”! Elvis Presley declared that the voice of Orbison was the most beautiful and distinctive that he had ever heard. It is not for nothing that his nickname was the “Big O”!

Roy died of a heart attack at the age of 52 on December 6th 1988… On April 8th, Roy Orbison became the first musician since Elvis Presley to have two of his albums in the Top 5 American simultaneously. 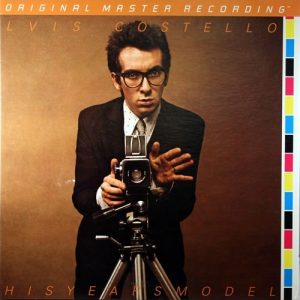 “This Year’s Model” was released in 1978 and is Elvis Costello’s second album. It is the first album recorded with his band The Attractions. The majority of the recordings were made at the Eden Studio in London. The line up consists of Elvis Costello (guitar, vocals), Steve Nieve (piano, electronic organ), Bruce Thomas (bass) and Pete Thomas (drums).

The first edition of the album features a cover that seems to be misprinted, with the “E” of “Elvis” on the outside of the cover as well as a printing color bar along the right edge. However, this is voluntary! It is indeed the initiative of the illustrator Barney Bubbles, just like the text “Special Pressing No. 003. Ring 434 32 32. Ask for Moira for your prize” printed in the central spiral on side A!

He largely influenced Punk Rock and New Wave from the early 80’s to the present day. This is one of my favorite 77/79 albums along with Joe Jackson’s legendary “Look Sharp”. A must have, and this MoFi re-edition is the opportunity or never!