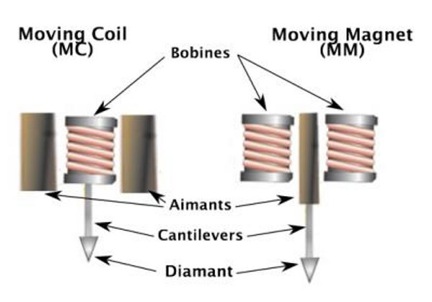 In 1948, NORMAN C. PICKERING invented the moving magnet cartridge, as well as the interchangeable stylus. This type of cartridge comprises two magnets (for stereo playback) directly attached to the CANTILEVER, that moves between two coils, in line with the movements of the stylus in the record's groove. These movements generate a modulation, and therefore an audio signal. The advantage of this technology is that the moving part is very light and can be replaced easily. The output level is high, usually between 2.2 mV and 6 mV and therefore easy to amplify.

These cartridges are often highly efficient (especially current models) and available at affordable prices, as they are relatively easy to manufacture.

The patent was filed by the Danish company ORTOFON in 1946. Contrary to the MM design, the two coils are attached to the cantilever and, by oscillating between the two magnets, they form the modulated signal. Due to the internal construction, the STYLUS cannot be replaced as it is attached to the cartridge. To reduce the weight on the moving parts, the number of coil turns is restricted, which generates a fairly low output signal, between 0.25 mV and 0.55 mV. Some manufacturers have boosted the magnetic field of their MOVING COIL cartridges. They are known as High Output MC cartridges. Their output level spans between 0.80 mV and 3.3 mV (BENZ MICRO, ORTOFON MC TURBO).

Induced magnet cartridges (IM) are derived from MC cartridges. In theory, they are an upgrade. Instead of the coil, a small soft iron rod is attached to the cantilever and moves within the field of a powerful and heavy permanent magnet. This setup reduces the weight of moving parts, improving their behaviour for treble frequencies and transients. However, these cartridges are heavy and must be associated with heavy tonearms.

Variable reluctance cartridges are neither MM, MC, nor IM cartridges. Their magnetic circuit consists of a thin soft iron rod that moves inside the air gap of a magnetic circuit polarised by a permanent magnet. These cartridges have low sensitivity, and the stylus is quite difficult to replace (DECCA London MK5, B&O MMC 20S).

VMS (VARIABLE MAGNETIC SHUNT) cartridges were developed by ORTOFON to overcome the flaws of MM and MC cartridges. In this case, the magnets and coils are stationary. When the tube starts moving under the effect of the modulation in the record groove, it short-circuits part of the magnetic fields generated in the ring magnet, which creates electric signals in the coils that recreate the record's original recording. This solution reduces the weight of the stylus/cantilever assembly and the cartridge, which makes it compatible with almost all tonearm types.

MOVING IRON cartridges are very similar to VMS cartridges. This solution uses very specific magnets and was invented by Norman C. Pickering. Nowadays, the principle is used by GRADO.

The service life of a cartridge (between 400 and 1200 hours) will depend on a number of criteria: design, quality of the materials that make up the stylus/cantilever assembly and manufacturing process. The quality of assembly onto the tonearm and the associated adjustments must comply with the data provided with the cartridge (tracking force, tonearm height, antiskating, etc.). Also, it is essential to use the protractors that come with the turntable or tonearm to perfectly align the cartridge with it. This adjustment must be very accurate as it is essential to guarantee playback with minimum tracking error.

- The '1/2 inch standard' mount cartridge is the most widespread. The wires run directly through the tonearm and are connected to the back of the cartridge using 4 contacts. Fortunately, the colour coded wires make the connection process easier: ??red: right output, sometimes indicated R (Right), ?white: left output, sometimes indicated L (Left), ?green: right ground, sometimes indicated RG (Right Ground), blue: left ground, sometimes indicated LG (Left Ground). ?Generally, the hot spots are on the top and the ground wires are on the bottom. Sometimes, the two bottom ground wires are identified as 'G' for 'Ground', like on the Micro Acoustics cartridge that is lying around in one of my boxes. ??You'll also find that some cartridges directly have the right colour code, and can therefore be connected even by a novice. Other indications can also be used, such as 'L' and 'R' for example, as well as 'G' for ground and 'S' for signal. If you think it through properly, it's easy to get by and if you don't connect the wires properly, the worst that can happen is buzz, or inverted right/left wiring.

?- The Ortofon/SME mount is often used by DJs. It is a bayonet fitting, and you either have a cartridge without a headshell that is directly plugged in, or a headshell in the standard 1/2" format. This setup is very useful for replacing the cartridge (though you have to readjust the weight)

?- The T4P mount - or P-Mount - is often used with tangential turntables. You will easily find a replacement cartridge, but replacing only the stylus is a lot more difficult as it is not standard. In terms of generic cartridges, the choice is quite restricted. 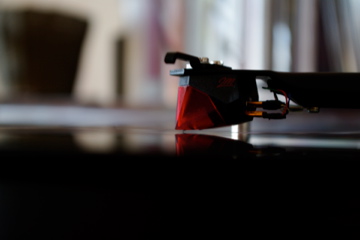 Before the advent of the microgroove record in the 50's, the tips that were used on phonographs had the profile and shape of a needle.

Because of the available space on the record, the groove width had to be standardised. It is 0.075 mm on average, but could be as small as 0.040 mm to extend the record's running length. From 1957 onwards, with the introduction of stereo recording, the groove had to have both walls form a 90° angle and bear the left and right modulation channel respectively. This process was developed by US company Westrex.

The stylus is almost always conical at the base. The part in contact with the record groove can be cut to different profiles. The first audiophile styli had a so-called conical profile, which was actually spherical, like the famous DENON DL 103 (1963). These styli have the advantage of being easy to manufacture and not to impose any specific adjustment rules for the SRA. As the surface in contact with the record is significant, wear will be minimised at a similar tracking force. But the distortion is high and the bandwidth is shortened in treble frequencies as a result. This profile is still used for entry level cartridges and those that require a significant tracking force, like those used by DJs.

The IDEAL profile would be one that would perfectly fit the shape of the groove as would a cutting stylus. But this is impossible because this type of stylus would create vinyl chips!

To reduce the base width of the stylus, manufacturers opted for the elliptical profile with a large axis perpendicular to the groove. The almond-shaped design is a lot more complex and requires high precision tools. Therefore, it is intended for mid-range or high end cartridges, although some entry level cartridges feature this profile (Ortofon OM5E, 'e' for elliptical.). It has the advantage of having a very low distortion in the treble frequencies and a highly precise sound reproduction as it follows the groove's every pattern. However, to reduce the tracking force, it requires a very lightweight stylus/cantilever assembly with a fairly flexible suspension. This type of stylus is not usually designed for low compliance cartridges. 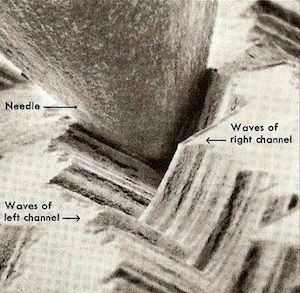 There are other qualitative elements related to the sound performance of a cartridge than the stylus profile. The choice of stone, its crystal orientation and polish after cutting are key factors for the sound quality and will guarantee a lasting playback performance. Some designs only use a plain microscopic stone that is just bonded to the tip of a cone made up of a less noble material, like titanium or sapphire at best, and even plain steel! Another element that directly impacts the sound quality of a cartridge: the Cantilever. It is a small rod that has the diamond on one side and either two magnets (MM) or two coils (MC) on the other. It can be made of either beryllium, boron (Ortofon Cadenza Black), ruby (Ortofon Cadenza Blue) and sometimes diamond (Dynavector). Many cartridges however, including high end versions, have an aluminium cantilever. It usually has a cylindrical profile, though it can sometimes be conical.