Home . Information Sheets. Getting down to technical details

Getting down to technical details

To date, the media designed for playing music, whether analogue or digital, have always used technical or technological solutions to extend the frequency response and increase the signal-to-noise ratio of the recorded signal.

With this objective in mind, various companies have been prompted to resort to equalisation during the pressing phase. This involves reducing the bass frequencies and boosting the treble frequencies (treble pre-emphasis) during the recording phase and applying the reverse point by point on playback. Basically, the recording follows a bell curve and an anti-bell curve is applied on playback (this is the difficult task of the phono preamp!). This brings the frequency response down to 20 Hz (bass), which was impossible without the emphasis as the groove excursions were too large and incompatible with the groove width: this caused the stylus to jump in and out on the record grooves if the recording included too many bass frequencies and the running length would be significantly reduced.

Between 1948 and 1955, pre-emphasis was completely erratic, without any form of consensus being found between the companies, who just applied their own curve (US MID 30, WESTREX, FFRR LP, EMI LP, NAB, Columbia). What's more, the curve used for the recording was not always specified, whether on the record itself or on the sleeve, making it difficult to identify the microgrooves, even to date.

In 1954, the Recording Industry Association of America (RIAA) created a standard based on the curves used by RCA and Victor. Shortly after, all the companies applied this pre-emphasis, now known as 'RIAA'. Most records pressed from 1955 onwards were recorded using RIAA filters.

Three time constants relating to 3 frequency thresholds were established. During recording, frequencies below 500 Hz were reduced by 6 dB per octave, and those above 2122 Hz were boosted by 6 dB per octave. On playback, the phono preamp uses the reverse curve. The recording curve comprises 2 high pass filters for 50.05 Hz (3180 µs) and 2122 Hz (75 µs) thresholds, and a low pass filter at 500.5 Hz (318 µs).

Original formula for the RIAA curve: 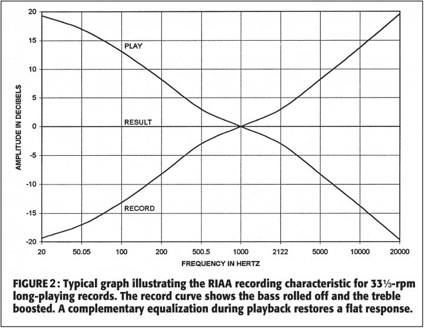 In 1976, the IEC (International Electrotechnical Commission) introduced a change to this curve, adding a fourth time constant that only affects the extreme bass frequency range. This is known as RIAA/IEC. This pre-emphasis was never a success, as the original RIAA curve is the most commonly used, even to date.

Note that the RIAA equalisation does not apply to 78 rpm records, which use a different technology to other vinyl records. They also use different cartridges and, most importantly, different pre-emphasis (US MID 30, WESTREX, HMV/Blumlein, FFRR 78 (1949), Early DECCA, Columbia, BSI). They date back to the pre RIAA standardisation era.

The recording process involves transferring the sound modulation onto a record. For early records, the sound was recorded directly, namely each record had to be recorded separately, either by playing the same track several times, or using several cutters simultaneously. Later on, the recording process was done using a master disc, that was then used to make the mould for mass production. In both cases, the most delicate operation was the recording process itself. So, although records are actually moulded, we incorrectly talk about cutting the grooves.

The grooves are cut at a 45° angle in both directions. The inner (close to the centre) and outer edges of the groove respectively carry the modulations of the left and right channels. Thus, the lateral displacement of the groove is the variation of the sum of the left and right signals (mono component), whereas the depth is the difference between the two signals (stereo component). This system ensures the compatibility between mono and stereo recordings, because a stereo record can be played on a mono player and conversely. Vinyl records are microgroove records, where the sound is recorded at constant speed (as opposed to CDs) onto a groove that runs from the outer edge of the record inwards (as opposed to CDs). The groove moves faster at the beginning of the record (also contrary to CDs, that play at constant speed), which yields a slightly better quality for the first tracks than at the end of the record, which is more difficult to read for the turntable tonearm that must have a perfectly adjusted antiskating correction.