History of the record

The forefather of the vinyl record is the 78 rpm record. They first appeared in the early 1900's. It was a microgroove disc with a diameter between 10 and 12 inches (25 and 30 cm), with usually one track on each side. Depending on size, they could hold between 3 and 5 minutes of sound. In fact, they were only rarely recorded at 78 rpm, instead at speeds of up to 66 and 103 rpm, to extend recording time, sometimes to the detriment of the frequency response. They were initially made of SHELLAC (an animal-based resin secreted by an insect), wax, cotton and slate. But the shortage of resin during WWII prompted manufacturers to use vinyl (polyvinyl chloride, or PVC) instead. 78 rpm records began to disappear with the advent of the microgroove in the 50's.

The arrival of the first 'modern' record players coincides with the invention of the microgroove in the USA in 1946 by Columbia. The first microgroove records were marketed in 1948. They contained Mendelssohn's and Tchaïkovski's music. Their acoustic and technical superiority over 78 rpm records immediately became a selling point. As vinyl records have a much finer grain (about 50 angströms = 5*10-3 µm), they allow for narrower and closer grooves to be cut. The use of this synthetic thermoplastic material instead of wax significantly increased sound quality: reduced background noise, increased frequency response, dynamic range and the running time, which jumped from less than 5 minutes to 30 minutes on 33 rpm records. 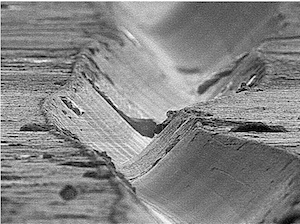 There are various formats and playback speeds.

Records rotating at 33 revs 1/3 per minute usually had a diameter of 12 inches (30 cm) or, more rarely, 10 inches (25 cm) in the late 50's and early 60's (Elvis Presley, Serge Gainsbourg, etc.) and more recently for certain re-releases and limited editions. There are also 7-inch (17 cm) formats that rotate at this speed. Standard 33 rpm records are called LP, standing for 'Long Play' and generally hold 20 to 30 minutes of sound on each side.

Records rotating at 45 revs per minute usually have a diameter of 7 inches (17 cm) and contain one or two tracks on each side. They are the forefathers of the 2-track CDs, also referred to as SINGLES. There are also (7-inch) 4-track 45 rpm records, called EPs, which stands for 'Extended Play', longer than a single, but shorter than an album. These 7-inch records generally rotate at 45 rpm, less commonly at 33 rpm. Many were used to produce rock ’n’ roll and classical works. 45 rpm records were produced exclusively for commercial purposes: create a 7-inch microgroove record to record one track on each side that could last up to 5 minutes and 30 seconds. With these specifications, the rotation speed needed to be adapted to use all the available space on the record. However, some say that the speed of 45 rpm was chosen for mathematical reasons only, since 45 = 78 – 33…

Many 12-inch maxi singles were released, primarily in the late 1970's. Maxi single records were chiefly generalised to hold longer tracks: over 20 minutes. They were popular with DJs and some independent radio stations that considered them easier to handle and their quality superior to 45 rpm and 33 rpm records. These records very often included unedited versions, remixes that did not feature on the official LPs. They are known as 'bonus tracks' or 'B-sides' on CD reissues.

Records rotating at 16 revs per minute were never a great commercial success. They were primarily intended to hold spoken content. They rotate exactly at 16 and 2/3 revolutions per minute, which is half of 33 revs 1/3. The first records were released in 1957 in different diameters: 7 inches (17 cm) for language learning purposes (educational use), 10 inches (25 cm) for specific commercial releases (in France, they were released by Vogue and Ducretet-Thomson), 12 inches (30 cm) for long literary works or plays intended for blind or visually-impaired people. In this field in France, the Union des Aveugles de Guerre issued many box sets (with 6, 8 and 10 records) that held up to one hour on each side. Typically, the records in these box sets adorned a central printed label on one side and, on the other side, a black label with the title of the music written in Braille.

In the USA, between 1956 and 1958, RCA and Columbia pressed 16 rpm records. Columbia specifically for their 'Highway Hi-Fi phonograph' record player. Chrysler fitted some on board their cars. These records had a running time of 40 to 45 minutes on each side and were exclusively intended to be played on a record player on board a car, as the groove, whose width was twice smaller than an LP required a cartridge with a specific sapphire. Most gramophone and record player manufacturers had designed a 16 rpm speed on their equipment, but due to the small production of these records, this option was quickly discarded. In terms of analogue sound reproduction, the faster the platter rotates (or moves), the better the quality will be, in particular in high frequencies (treble). This is why 16 rpm records failed to convince musically savvy audiophiles.

Some records even have one side in the 45 rpm format and the other in the 33 rpm format. Some rare records rotate from the centre outwards, some are coloured, others transparent. Those referred to as 'Picture discs' are adorned with a drawing or a photo on both sides, others are cut to a flower or star shape, some have one side that is recorded and the other blank or even carved… The truth of the matter is that sky's the limit and everything has been done!