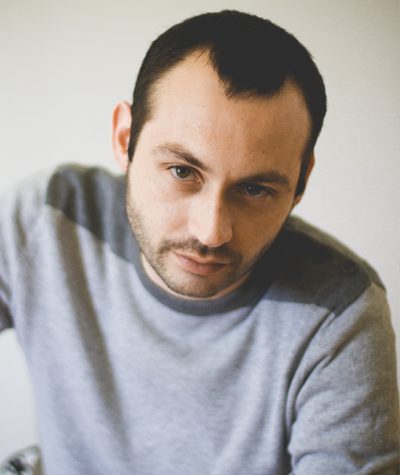 A few weeks ago, we had the opportunity of visiting M Com’ Musique’s factory, a company from Brittany, France, specialized in the pressing of vinyl records. We made the most out of this opportunity to conduct an interview with Antoine, one of the co-founders of M Com’ Musique.

– Have you always worked in music?

I have been working in music for several years yes! I started working in music when I worked in a fine arts store in Paris where there was a manager and a loved one of Mano Solo at the time. They took me under their wings by bringing me everywhere, at every concert, meeting everyone. When I met groups that I listened to, my eyes would lit up! This is when I told myself: “I am going to work in music”.

I then founded an organization in Rennes with whom we organized concerts. It is therefore my personal experience that brought me towards music.

– How did you come up with the idea of founding your own vinyl record pressing company?

When I founded the organization, I worked nights and weekends in a car repair shop, and this is where I met Mickael (Editor’s note: Antoine’s partner and co-founder of M Com’ Musique).

Mickael, for his part, had an organization where he managed a motocross athlete. His thing is mechanics, cars, etc. We talked and realized that both of us wanted to become entrepreneurs. We went for it and since I had a network in music, we told ourselves that we were going to try to do something related to music.

I thus went to ask Beast Records label in Rennes, France, if there was anything they needed. They needed promotional work and so we started doing media relations together. We then set up a distribution network. It is thus by working with Beast Records and with customers in commercial areas, by talking with everyone, that we saw vinyl records were making a comeback. We told ourselves: “Let’s do it, let’s make vinyl records”.

– How were you able to accomplish your project and thus found M Com’ Musique? What steps did you go through?

We had the idea in April 2014, in November 2014 we arrived in our current offices and had registered the company. Everything went very fast, we made a provisional schedule without even having any experience in the creation or technical aspect of a company. Industrial production was completely unknown for us.

Moreover, at the time, the different machines used to make vinyl records did not exist, there was nothing left for vinyl! We still managed to find in the Netherlands our first moulds and the first typical machines for vinyl records. However, regarding the press machine, we had to build it by ourselves and had to buy an actuator and chassis.

We held on for about 2 and a half years/ 3 years with the press machine we built and the second hand  material we bought. And then, everything slowly started falling apart… At that time, we asked ourselves if we should continue or not, because we did not have a lot of money. We decided to raise money in the beginning of 2017. Thanks to this, we were able to install our new vinyl record press machine just a few weeks ago! 🙂

– Does having a manual machine help you better understand the manufacturing process of a vinyl record?

Absolutely. Since we built the machine, we really had to take interest in the different implications on the vinyl record for all the changes to operate on the press machine.

And in addition, we had to learn the job! There are no schools that teach you how to make vinyl records: cleaning the moulds, spotting a defect with a vinyl record, knowing why the record can be warped, etc. All of this, you have to learn it and understand it. And since vinyl had disappeared, we had no one to teach us all of this. We had to learn on the spot and do our best to make a vinyl record of good quality. We then improved the quality of our vinyl records for over 2 and a half years.

– What are M Com’ Musique’s strengths?

The first strength is the fact that we built the vinyl record press machine by ourselves. We know the technical process from A to Z!

Today, we have also invested in equipment that is at the cutting edge of technology, whether it is for cold regulation, for the press machine itself, for the processing of raw material waste, etc.

We also have a sound approach that is different from the other factories. This means that we are capable, from the audio file provided by the customer, to tell how the vinyl record will sound before we even make it. We then send feedback to the customer mentioning the improvements that can be made to the audio file.

We listen to and technically analyze the file. This is what is called a mastering audit. We almost always offer this service to our customers.
We noticed that 70 to 80% of the masters we received were not made for a vinyl record. Customers complained that their vinyl record sounded bad… So we resolved the problem backwards by listening to the customer’s audio file and giving them advice on how to improve the audio. Today, we almost do not have anymore after-sales service regarding this type of problem.

– Can you explain the manufacturing process of a vinyl record?

To make a vinyl record, there are several main steps, after having recorded and mastered the record of course.

1- Pressing of a vinyl record – Cutting

The first step, is cutting. The music is engraved on a lacquer, an aluminium plate covered in polish. There is a lacquer for each side of the record that is engraved. It is made in a studio with a machine that looks like a turntable, but it is the opposite. Indeed, instead of the needle vibrating when following the groove, it vibrates in order to dig the groove.

2- Pressing of a vinyl record – Galvanization

Once the first step is complete, the lacquer is sent to Italy to be galvanized. The galvanization process is when the lacquer in plunged into a chemical bath. In this bath, are nickel particles. By electrolysis, the nickel particles will rest on the lacquer previously engraved. After several minutes, we unmould and the result is a negative that is 250 microns thick. We will insert this negative in our press machine, which we will use to press the vinyl records.

Furthermore, when we receive the templates made in Italy, we have to adapt them to our production tool. We will precisely center and cut them. We will thus pre shape them, this means giving them a pre shape of an inverted vinyl.

3- Pressing of a vinyl record – Pressing and packaging

– Do you have any data to give us on the number of records you press?

– Where do your customers come from? From Brittany of from elsewhere?

Our top customers are from Brittany, they have been with us from the beginning. I am thinking for example of Beast Records or Enragé Production. There are also a few groups around here with whom we work regularly.

Our customers are French, we have also worked a little with customers from Canada, Greece, and England.  But his year, half of our production will go to Germany, for just one customer! Since we make so much more vinyl records now, our customers are going to change. We can now take customers that we could not take before. 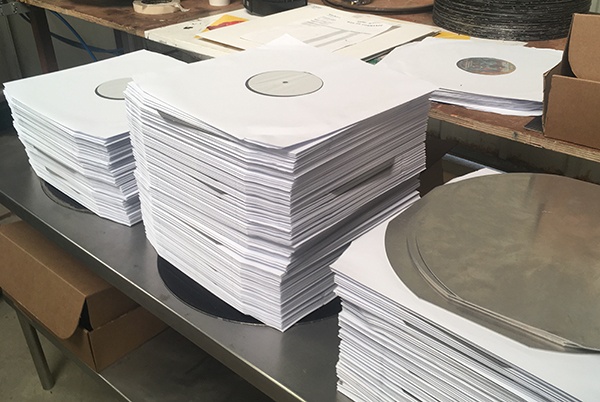 – What are your goals for the months or years to come?

The goal is to internalize things that at the moment we outsource, like for example galvanization.

We would also like to make at least 200 000 vinyl records this year. Up until now, the most vinyl records we have made is 50 000. This is thus a challenge! But with our new automatic vinyl record press machine, we are already not very far away from reaching this number.

– Do you yourself have a turntable? If so, what turntable do you have?

Yes, I have the Rega Planar 1 turntable. I do not have a lot of vinyl records because initially I was not a fan of music recordings, whether it was vinyl records or CDs. What I loved were concerts. I therefore discovered vinyl records when making them!

In our offices, we also have the Pro-Ject Debut Carbon Esprit SB turntable with a phono preamplifier and Hi-Fi headphones. This enables us to listen to what we will produce, when setting up the machine and therefore before producing a series of vinyl records, to see what the final result will sound like.

This also enables us to then test a few vinyl records randomly chosen from the series. We are going to technically analyze the vinyl records, by listening to for example the blanks that are between the musical pieces because this is what will tell us if there is whistling or crackling.

We therefore use this Pro-Ject turntable, that we connected to a home cinema. Since not everyone has a high quality Hi-Fi system, this enables us to see how the vinyl record will sound on every system. If it sounds great on a home cinema system, it will sound great anywhere!

In this video, find out more about our visit at M Com’ Musique’s factory: