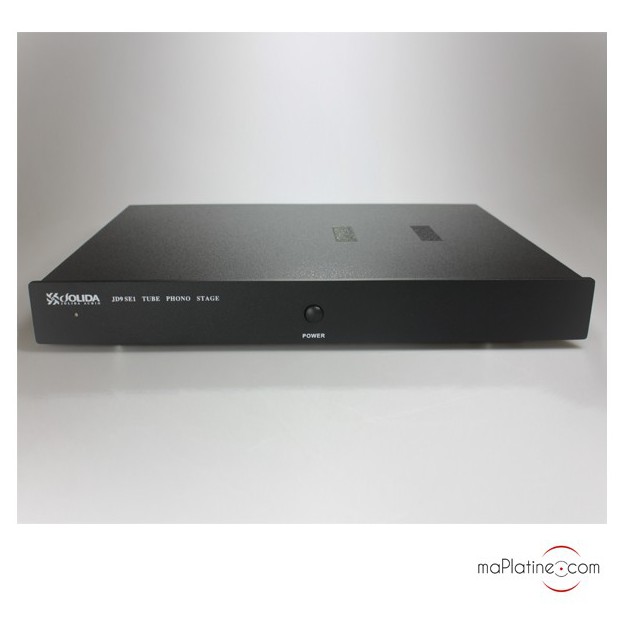 The JOLIDA JD9 preamplifier needs no introduction! In recent years it has carved out a rather enviable space for itself in the field of affordable high-end phono preamplifiers. Much ink has been spilled over this preamp on the forums and in the industry press, and for several reasons: its production quality, technology, reliability and musicality that is far beyond its price tag.

In order to shut down the many modifications suggested by enlightened (or not so enlightened!) fans and industry professionals, which made the warranty null and void, Jolida has now released an upgraded version of the product for the more exacting audiophiles out there!

From the outside, the only way to distinguish it from the JD9 MKII version is the ‘JD9 SE1’ logo on the front. It has the same grey or black aluminium front panel, with just an on/off switch and blue LED light. On the back panel there are the three conventional pairs of gold-plated RCA sockets – one input for the turntable and two outputs. These two outputs have different gains: one with a high gain level, which we recommend should be connected to an integrated amp, and one with a low gain level, that we recommend should be used for line preamps. Underneath a small chrome plate, there are two DIP switches which allow you t adjust several settings. The three input gains: MM, low output MC and high output MC. And the four resistance and capacitance levels.

Inside, the different parts are highly distinct. On the left, the power supply is constructed around a generous R-Core transformer and powers the RIAA card and output card. The output card uses two SOVTEK low noise 12AX7 WA tubes, unlike the JD9 which uses Chinese versions of these tubes. The link capacitors have been replaced by the excellent MKP capacitors by Mundorf. The RIAA card is enclosed in a shielded housing and has undergone several alterations. For example, all of its capacitors have been replaced by MKP models from WIMA. The wiring has been carefully assembled and only uses cables with low resistance and low capacitance. It also uses a filter for the transformer.

We couldn’t resist comparing it to our original JD9,

and were impressed by the improvement in neutrality and transparency from the opening bars. Not that the original model sounded particularly stifled in the first place!

The dynamic range is even more evenly spread than before, and not just concentrated in the mid-range like so many of its competitors. The bass has the same depth and breadth, but has gained in articulation, tightness and even speed, resulting in a more fluid and natural sound. It sound less like a typical tube phono stage now, and seems to have lost the charm it used to have in the mid-range. The overall sound quality is now much more fluid, nuanced and rich. Of course, the JD9 has all of the other features that made it such a success in the first place, such as its timbre, musicality and compatibility with the majority of the MM and MC on the market.

The JD9 SE1 is a remarkable product on all fronts, and some would say it even outshines preamps 3 or 4 times its price. If you're looking for a versatile, high quality preamp but don’t want to break the bank, the Jolida JD9 SE1 is for you. A benchmark!