Before the era of digital music, storage was not an issue as the physical supports (vinyl, CD, DVD, etc.) provided this. Savvy music lovers no longer need large rooms to store their vast music library. With audio files, we speak about storage volume or capacity of a hard disk. The issue of storage is very important in digital music, dependent on the storage capacity of the device used, you must choose between having a large quantity of low quality music (mp3 format for instance) or fewer files but of very high quality (Studio Masters).

The mechanical hard disk is a magnetic mass storage. It is used to write (code digital data) and read that data. The first hard disk was designed by IBM (invented by Reynold Johnson) in 1956 offering 5 MB of storage for a cost of $10,000 dollars! The hard disk market has progressed greatly with storage capacities of 4 Terabytes for around €300 for entry-level prices. 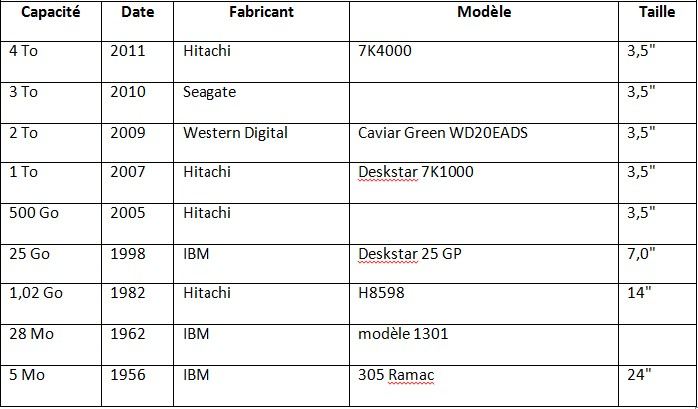 This is a diagram of a hard disk: 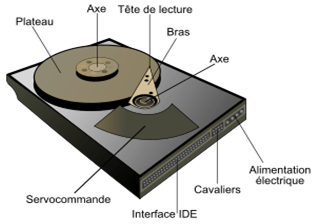 You could assimilate the operation of a hard disk to that of a vinyl turntable! There are several elements in common: a power supply, a platter, a spindle, a tonearm and a read/write head! The hard disk platter is made from aluminium, glass or ceramic. Its sides have a magnetic strip. Data is written using electrical current, according to the reversal or not of the magnetic field, the write head inscribes a 0 or 1. The same operation applies to reading.

It is important to note that the performances of your hard disk deteriorate when more than 80% of its memory is used. When it is overloaded, the latency, transfer, search and access times are extremely slow and may damage the equipment. Always ensure that the hard disk has enough space so as not to reduce its service life.

Continuously expanding technology has driven a significant fall in the cost of memory since 2006, when the GB was at €32. September 2011 saw the cost of the Gigabyte reach €1! The GB is currently at €0.68 and storage is no longer a problem. Thanks to the accessible cost for consumers, these are no longer rare or exceptional products that are only affordable by some people. 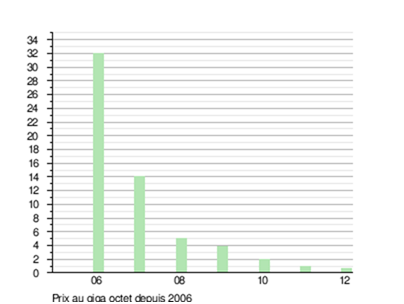 The simplest way to store music is to use the hard disk of your computer, keeping an eye on the remaining available space. For security reasons, your library should be backed up onto second hard disk to prevent any 'loss of data'.  However, your computer must be switched on for you to listen to your music.

You can also store your music on portable devices thanks to memory sticks. Memory sticks work in the same way as the ram of a computer, but they do not lose the data when the voltage is switched off. This category includes smartphones, iPod, mp3 players, but their memory capacities cannot rival those of a hard disk. At most, iPods go up to 160 GB.

Another way is to store your library on a network disk (NAS: Network Attached Storage). This device has one or more hard disks and makes its content available via the network.  Accompanied by a network player, you can listen to your music without switching on your computer.

Finally, the all-in-one solution: the musical server. This is a highly autonomous device that allows you both to digitise your CDs, store them and play them, naturally with a connection to your amplifier and speakers. In addition to a local operation, some servers have network access. You can then access the content of devices connected to your network.

This table gives an idea of storage capacities with the quantity of music: 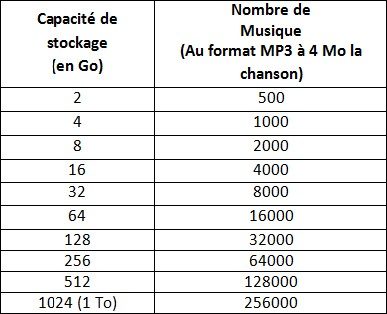 The Cloud defines data outsourcing.  Indeed, this is a service offered by companies who physically store your data and duplicate them in two or three different sites. The Cloud can be accessed everywhere through compatible devices such as smartphones, tablets and computers, provided you have access to the internet.

There are three different storage solutions on the cloud, Apple iTunes Match, Amazon Cloud Player and Google Play Music. All of them use 'Scan & Match' technology. It reviews your local library to find the corresponding files to the catalogues proposed by these services and provide them on the cloud in a specific bandwidth and format.

First of all, iTunes is the leader in online music sales. For €24.99 a year, it provides a storage space of 25,000 tracks, in addition to all the tracks purchased in iTunes store. iTunes Match encodes the files of your library corresponding to the catalogue, in AAC format in 256 Kbps and makes them available on iCloud. There is no re-encoding for tracks that do not match the catalogue

Next, there is the Amazon Cloud Player offer. For €24.99 a year, you can store up to 250,000 tracks. Amazon also has a music download platform called Amazon MP3. If you are a customer, you have an unlimited storage space for your purchases on the site. The free test version offers storage for 250 tracks, in addition to all the ones bought on Amazon MP3. Amazon Cloud Player encodes in MP3 format with a maximum bandwidth of 256 Kbps. There is no re-encoding for tracks not in the catalogue

By using one of these 3 Cloud services, you can, at any moment, recover your tracks locally from the cloud.