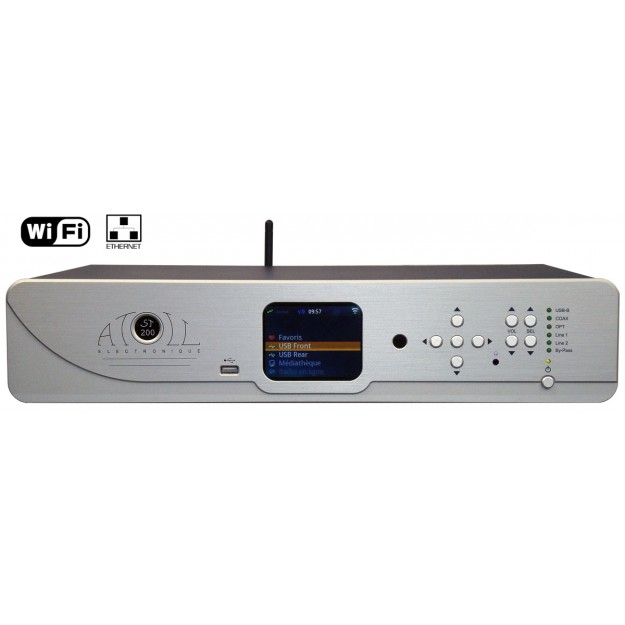 The Atoll ST200 has two digital inputs, one optical and one coaxial, and two stereo RCA analogue inputs. It also has two digital outputs, one coaxial and one optical, for connecting to a digital-to-analogue converter such as the Atoll DAC200. It also has a stereo analogue output for connecting to an amplifier, as well as an antenna connector (for Wi-Fi) and Ethernet RJ45 port for network connection. On the back panel are two USB inputs, one type A and one type B, and on the front panel is another type A USB input. To the right of the USB input is a colour screen. The Atoll ST200 network player has a set of buttons for browsing the menu, which can also be done using the remote control provided with the product. A free Apple and Android application is also available for controlling the network player. Next to a set of volume buttons is a 3.5mm headphone jack output. These buttons can be used for either headphone listening or when the preamplifier function is being used, as the Atoll ST200 can also be connected to a power amplifier. There are two other buttons which can be used to manually select a source. The Atoll ST200 network player gives you access to thousands of internet radio stations (vTuner system), and can also access all of the music stored on your computer or network hard disk (NAS).

French brand Atoll has been solidifying its expertise in the Hi-Fi world since 1997. The ST200 network player has everything an audiophile could want for playing HD audio files.