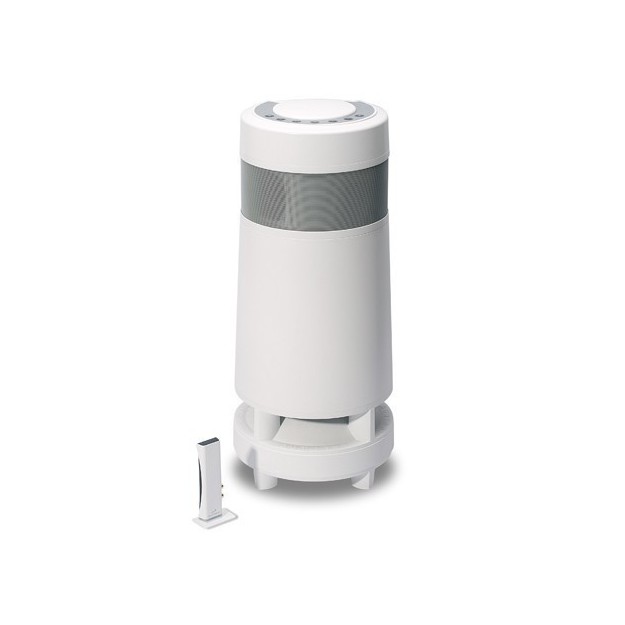 The Outcast ICO-420 by Soundcast is the new and improved version of the Outcast Junior OCJ-420 outdoor speaker. It is twice as powerful as the Outcast Jr., boasting an output of 100W compared to the Jr.’s 50W. The ICO-420 also differs from the Jr. OCJ-420 in that it has a 20cm subwoofer (compared to the Jr.’s 16cm subwoofer) and attractive LED backlighting, which can be switched on and off using the switch on the top of the speaker.

Its 4 omni-directional loudspeakers create an incredible 360° stereo sound, and the subwoofer produces a deep, tight bass that sounds great outdoors. The Outcast ICO-420 is fully weather-resistant, and can stream music from multiple selectable wireless sources. Alternatively, it can also play music from sources with an analogue stereo output such as an MP3 player or CD player when connected with a cable.

The Soundcast Outcast ICO-420 also functions as a Bluetooth receiver via the optional Soundcast Bluecast receiver. To listen to your music this way, just pair the Outcast to any Bluetooth-enabled device (tablet, smartphone, iPad, iPhone, etc.) by pressing the button on the device. Set-up couldn’t be quicker or easier. The Bluecast uses Bluetooth V3.0 technology as well as aptX and AAC codecs for improved sound quality. The Soundcast Bluecast can be charged using the USB port and has a battery life of 8-10 hours of playback.

The UAT-250EC transmitter (optional) transmits a wireless audio signal with a range of 30m indoors and 60m outdoors. This transmitter can accommodate up to 3 sources as it has a USB input for streaming music to the Outcast from a PC or MAC, an RCA stereo analogue input for playing music from a CD player, radio tuner, or any other device with an RCA stereo analogue output, and a 3.5mm analogue stereo input jack for MP3 players or any other device with this type of output.

The iCast transmitter (optional) also functions as a dock for Apple devices (see compatibility in technical specifications). It enables you to stream music wirelessly from one of these devices. It has the same range as the UAT-250EC transmitter. It also has a 3.5mm jack input for any source with a corresponding analogue output, such as an MP3 player.

The UAT-250EC and iCast transmitters both transmit a crystal clear audio signal without interference. A patented protocol uses 2.4 gHz signals to stream music wirelessly through walls, floors, doors and ceilings. They both have a rechargeable battery with a life of between 4 and 7 hours, depending on the power used. The Outcast is light enough to carry in your hand, and a series of buttons on the top of the device lets you pause and play the music from the source. They also allow you to control and volume and skip to the previous or next song.

The Soundcast Outcast has been an enormous success. Once you've got it up and running in the garden or by the pool, the Outcast produces a powerful and enjoyable sound. The Outcast truly is a benchmark product, and is without a doubt the most well-regarded outdoor speaker in the world. Its 360° playback means that you can enjoy a full-bodied sound, no matter the source you're playing your music through.

Optional: UAT-250EC transmitter (for PC and Mac, CD players, MP3 players, and any other device with an RCA stereo or 3.5mm jack analogue output)