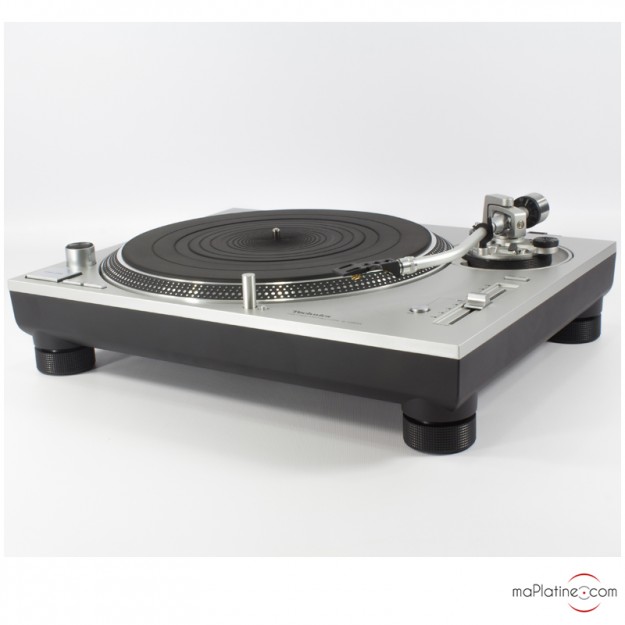 After the unhoped success in 2017 with its Technics SL-1200 G Turntable, the group Technics/Panasonic made its “best buy” more affordable.

This new Technics SL 1200 GR vinyl turntable (and 1210 GR for the black version) looks similar to the high end turntable of the manufacturer. At first sight, a non informed music lover has a small chance of differentiating both products. However, there has to be differences to justify the 2000 euros price gap between these two turntables.

You will find the same chassis as “the big sister” but it is simplified, thinner, and made out of a simpler and one layer molded structure. This can easily be seen on a scale as the Technics SL 1200 GR weighs almost 6.5 kg less! Don’t worry, it nevertheless is very massive and rigid.

This baseboard rests on 4 cushioned feet borrowed from the “MK2” from the 90’s.

The finishing is excellent and much simpler than the SL 1200 G. The aluminium used is obviously not the same.

There is a drive principle based on a magnetic mechanism (without turntable belts), called direct drive. A magnetic field induced by knobs drives the platter of 2.5 kg which has a circular magnet.

Even if the torque is reduced compared to the “G”, it is still impressive with 2.2 kg/cm and does not stop the platter from reaching the speed of 33 ⅓ RPM in 0,7 s! There are not many variations in the  rotation and this one is stable at 0.01%.

The signal-to-noise ratio is also very excellent and is -78 dB.

It offers of course a control of the speed (pitch), which enables an adjustment of the speed of the rotation from -8% to +16%. This functionality seems to be only destined for a professional use (mix, DJ). 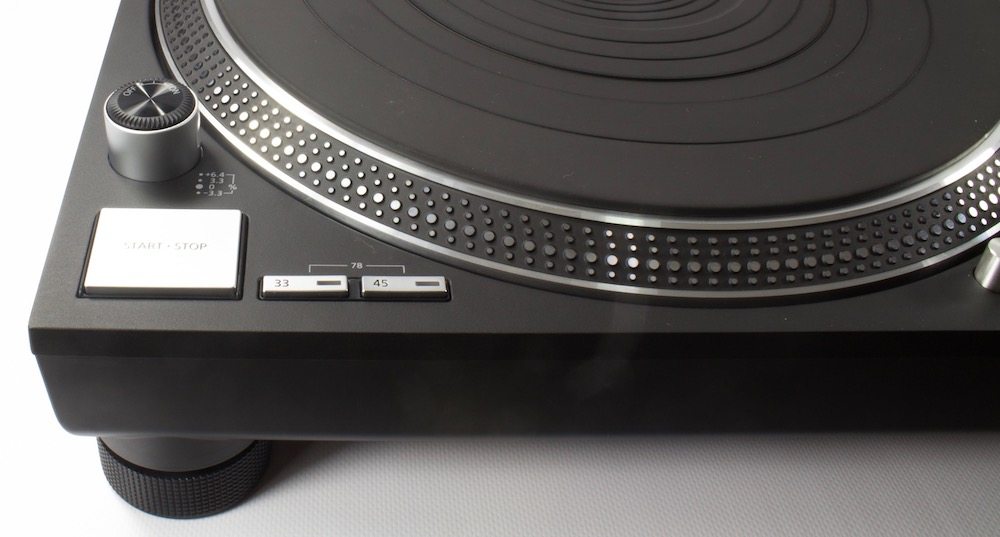 There is an S shaped tonearm in aluminium with a removable headshell. It is easy to put in place and offers all of the necessary adjustments of the tracking force, anti skating and VTA.

Contrary to many prejudices, the restitution is not ultra-analytical. The whole is well balanced and even very neutral. The dynamics are frank and the tempo is very distinctive.

Since the first percussion notes, we can’t stop ourselves from stomping our feet. Indeed, maybe this Technics SL 1200 GR vinyl turntable is less agile concerning records that require nuance and subtlety.

Its belt-driven competitors seem to better reproduce the articulations of the bows and strings. However, this is not what we necessarily ask of a turntable such as the SL 1200! Rather, we expect a low that is tense, articulate, rapid and a treble that is precise as well as a medium that is neutral! We are not disappointed!
The soundstage stays relatively precise and realistic.

Having been in possession of two Technics SL 1200 MK2 vinyl turntables during the end of the 80’s, I have to admit that there is a moment of emotion and nostalgia when unboxing this vinyl turntable. And I am certainly not the only one as Matsushita says they have sold more than 3 million turntables since 1972! The “GR” is similar to the original model “made in Japan”, even though it seems to be better manufactured and better finished.

As I am sure you understand: for those who do not want to make a compromise, there is the Technics SL 1200 G. The Technics SL 1200 GR vinyl turntable is more affordable than this legendary turntable and offers a performance and musicality similar to the high end model, and far superior to the models of the 80’s and 90’s.

It is highly recommended for those who wish to have an ultra efficient Hi-Fi or professional direct drive turntable.