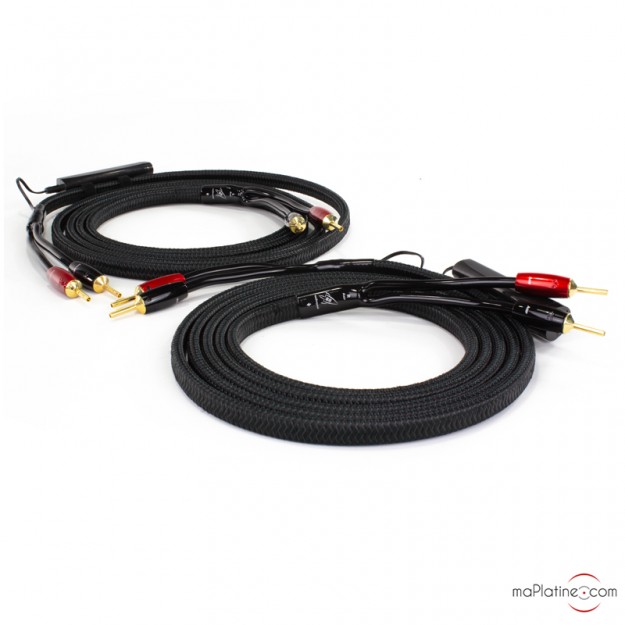 The Audioquest Rocket 88 speaker cable is also built following a dual Star-Quad geometry that conserves time information as well as dynamics and clarity.

The geometric relationship between conductors has a huge impact on the sound.

Star-Quad technology is not only far superior to parallel conductors, but also to the same conductors that would be twisted in two pairs.

All the conductors of this speaker cable (total of 8) are made of PSC+ and PSC single-filament copper (Solid Perfect-Surface Copper). This combination perfectly balanced removes sound hardness and significantly improves the clarity compared to OFHC, OCC or 8N coppers. High-purity PSC+ copper limits the distortion caused by grain junctions that exist in every metallic conductors.

The single-filament conductors are only manufactured with PSC+, the best and purest copper used by Audioquest.

Negative conductors of the Rocket 88 cable are covered by partially conductive carbon-filled polyethylene insulator. This material reduces radio waste sent to the amplifier, thus limiting RF interferences in the audio circuit. Moreover, a carbon layer reduces the interaction between the positive and negative conductors.

Each conductor receives an expanded polyethylene sleeve filled with air. The advantage is that the air barely absorbs energy and that polyethylene presents a very low distortion profile.

It is equipped with excellent gold-plated banana plugs of the 500 series. They ensure a superb contact with a very low electric resistance.

The Audioquest Rocket 88 features a patented Dielectric Bias System (DBS). This consists of inserting two wires into the cables insulation with a voltage of plus and minus 72 volts!

This one is provided by a battery fixed with velcro on the cable. Given that there is no current and that the batteries have a very low auto-discharge, they last many years during and are easy to replace.

A LED test button is present on every DBS box.

The restitution offered by the Audioquest cable is very nuanced and fluent. We find an excellent sound stage with a precise placement of the musicians.

The timbres are clearer and brighter than the lower range versions, but never aggressive or flattering at the top of the spectrum. The dynamic is surprising and, among others, in the bass where it is reproduced with outstanding swing and articulation.

The mid-range is superb by its presence, matter and neutrality. The overall balance is very successful. The Rocket 88 does not highlight a part of the spectrum more than another.

The reproduction is uniform and prefers musicality to a surgical transparency.

This Audioquest Rocket 88 speaker cable is for sure expensive, but it is evidently one of the best in its category!