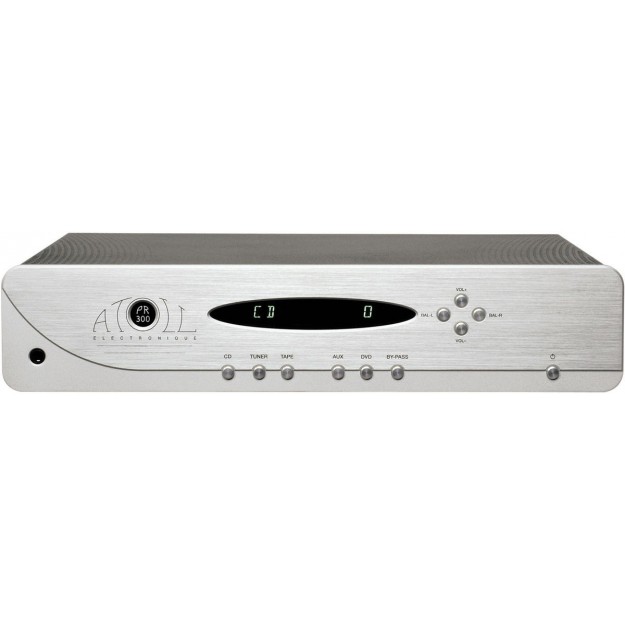 The front panel of this Atoll PR300 SE preamp is faithful to the Atoll look. Not only does it deliver remarkable sound quality for a product in this category, it also gives you several different connectivity and compatibility options with a range of audio equipment.

It has a thicker front panel than the Atoll PR100 SE and Atoll PR200 SE preamplifiers. It is made of 8mm-thick brushed aluminium, available in either silver or black. Its weight is also unusual – it’s not often that you find a 9kg preamp! All of the device’s functions can be controlled via the aluminium buttons on the front panel, which include the volume, balance, 5 line inputs and the bypass function. On the back panel are 5 line inputs, 1 Tape Out and 2 preamp outputs designed for use with power amplifiers. All of these are RCA sockets and allow for vertical or horizontal bi-amplification (using one amp per voice or register). The Atoll PR300 SE preamp also features a bypass input, which gives you the option of connecting the device to a high quality audio/video system without sacrificing the audio/stereo part. The AUX line input can be used to house an Atoll P100 phono stage, an Atoll DAC card or the Atoll Wireless receiver module. But it should be noted that only one of these cards can be used at any one time. It also has a 12V trigger which can be used to start up amplifiers with a trigger input.

Internally, this preamp has a fully dual mono design, from the analogue input through to the power supply, which is why it uses a toroidal transformer capable of delivering 330 vA per channel – that’s a total of over 62,000 uF of filtering capacity! It features exclusively top shelf components, and has a larger power supply and filtering capacity than other devices of its kind. As usual with Atoll, the circuit boasts a clear and authentic sound, as well as expertly manufactured audiophile components (capacitors, discrete components).

It is incredibly easy to operate and doesn’t require any particular precautions to be taken. The Atoll PR300 SE preamplifier was designed for use with the Atoll AM200 SE amplifier, but it also perfectly complements the Atoll AM100, the Atoll AM80 and the Atoll AM50 amplifiers (SE and previous models). And that’s not all! Thanks to its excellent production quality and musicality, it is capable of powering a great number of different types of amplifiers.

The Atoll PR300 SE won us over within seconds of listening. It does everything the Atoll PR200 SE preamplifier can do, but even better! The bass is deeper and has more articulation than the PR200, the mids are fuller and more natural, and the treble blends more seamlessly into the music. The sound stage is also more beautiful: it’s wider and deeper, with a greater sense of realism.