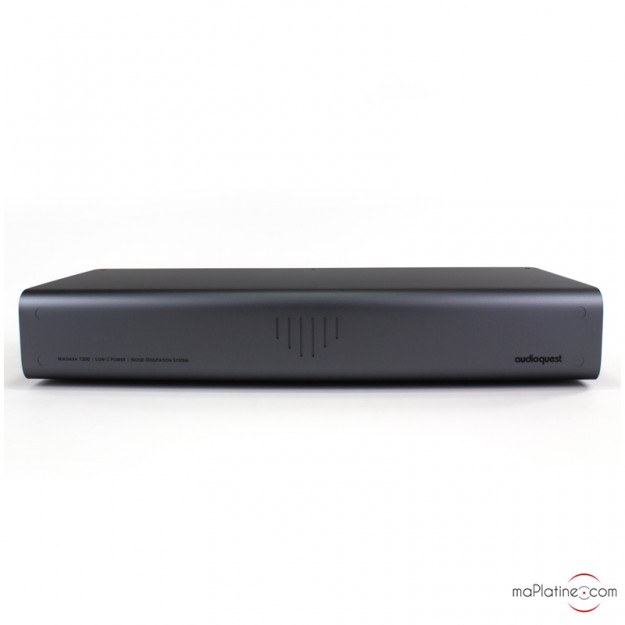 The Audioquest Niagara 1200 power conditioner replaces the excellent Niagara 1000. It offers a higher quality finish, better ergonomics and a significant improvement in performances.

Now, the Niagara 1200 can be placed at the bottom of a Hi-Fi furniture. It can also be used face down, and as a standard power strip!

Like its big brothers, the Niagara 1200 is wired with a mono-wire conductor with very low resistance.

The power supply has been highly optimized and still meets the audiophile demand. Specific capacitors have been used to improve linearity and minimize distortion. The input and output contacts offer low impedance thanks to a silver and beryllium plating on very pure copper.

The Audioquest Niagara 1200 has surge protection that does not affect sound restitution. A technology patented by Audioquest allows the dissipation of noise generated by the ground.

The Niagara 1200's protection circuits ensure your system is completely protected against power surges and AC peaks up to 6000 V/3000 A!

The maximum input current capacity is 15 amps, which is more than enough for input or mid (high-end) devices.

We have linked this Audioquest Niagara 1200 power conditioner to a system with a transistor amplifier and a large tube amplifier.

From the very first notes, the sound is " full " and much more coherent. We are impressed by the increase in detail and precision in the high mid-range.

The lower spectrum is much more defined and tense, with silky, undistorted treble.

The end notes also seem longer and less flooded in noise. The instruments are better placed and offer more space between them.

The Audioquest Niagara 1200 power conditioner has far exceeded our expectations in terms of impact and musicality. At the proposed price, it is the bargain of the moment!