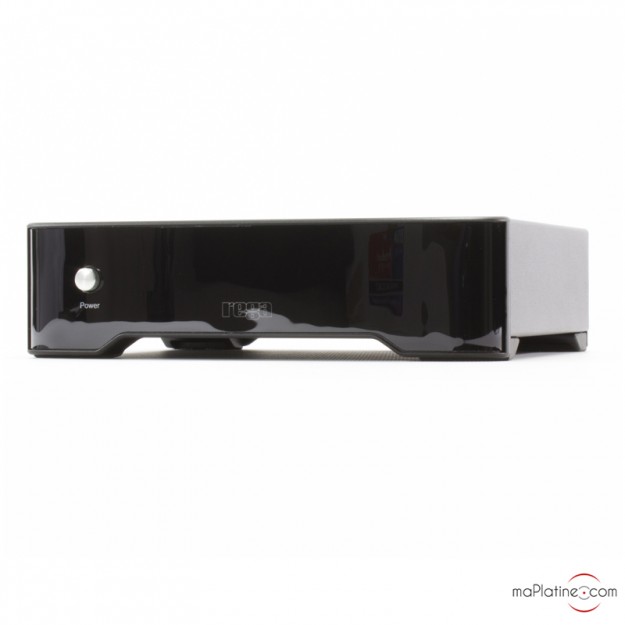 Phono preamplifier
MC compatible
Configurable
Made in the UK

Rega's Fono MC phono preamplifier is truly a new product. It is an affordable alternative to low output MC cartridges. So far, if you wanted a Rega phono preamp compatible with low output moving coil cartridges, you had to opt for Rega's Aria phono preamp!

It has an aluminium housing similar in size to Rega's Fono MM MK3 phono preamplifier but they actually seem identical!

The front panel has the curves and power switch with the red backlit logo.

The rear panel has two RCA pairs (stereo input/output) and a ground plug. In fact, it has two additional sets of switches to configure the phono preamp based on the features of the associated MC cartridge. The load resistance (70Ω, 100Ω, 150Ω and 400Ω), capacitance (1000pF or 4300pF) and gain (63.5dB or 69.5 dB) can therefore be adjusted.

The structure of the Rega Fono MC is derived from the circuit and research work conducted for the Rega Aria.

The Fono MC uses a low noise FET transistor (LSK389). Low noise and linearity are paramount to get the best out of an MC cartridge.

Due to the high input impedance of the FET, the loading of the amplifier's circuit is minimal and cannot influence the cartridge's performance.

An operational MUSE amplifier is used in the RIAA equalisation amplifier.

Polypropylene capacitors have been used on the signal pathway for the RIAA equalization circuits.

It has all the reproduction features typical of Rega: a beautiful timbre and great dynamics and soundstage.

It exhibits the very analogue softness that fans of the British brand love so much.

The Rega Fono MC also has a sense for detail and is precise and detailed enough on all musical styles.

The new Rega Fono MC phono preamplifier is a great find and will perfectly meet the growing demand of users of Rega MC cartridge at a very attractive price. Would recommend!